Posted at 19:13h in Leadership by MSelzle

As the evidence for the efficacy of coaching grows and more organizations join the debate about how to create a coaching culture, increasingly managers and leaders are being encouraged to adopt a coaching methodology. But that is so much easier said than done. External and internal coaches have less complexity in their coaching alliances. The leader as coach is often juggling many roles. Many of the existing coaching models just don’t respond to these competing demands. These developments led to a number of managers from different industries raising this challenge with us at the International Centre for Leadership Coaching (ICLC). These leaders genuinely wanted to offer the benefits of coaching to their employees but the widespread models and training programs weren’t matching their needs.

It is with this in mind that we at the ICLC created the Milner & Couley LEADER model and associated training packages. The LEADER model is a framework that is specifically designed with the manager as coach in mind, with training programs that can be tailored to an organization’s unique needs. The model which is described in our book “Coaching: How to lead” is comprised of six stages.  In future posts we will describe each of the stages in more detail. 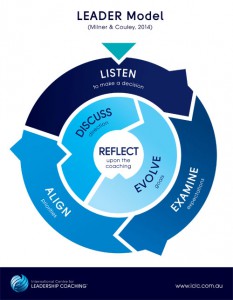